skip to main | skip to sidebar

WELCOME TO MY BLOG

Gull Rock Study, 10x12, oil/linen, copyright 2008
I am writing this blog to join in on the world of internet dialog about painting. Many friends of mine have been spending much of their free time on the internet, instead of painting with me. I have become isolated, and therefore, decided to join them in exchanging ideas and conversations about art, painting, and the daily highs and lows of being a professional artist via the computer, just like Pissarro and Cezanne.
This seems as good a time as any to jump in on the blogging fun. Although it is the middle of one of the most wintery months of the year on Cape Cod, there has been a flurry of excitement here this week. The Addison Art Gallery has hosted two openings to showcase the work of eleven painters and me from a September painting trip to Maine.
All but three made it out to the Cape for the show. It was great to see the guys again. Right away the laughter and camaraderie picked up as if we were back in Nanatuck, our rented house in Port Clyde.
We got a couple of great articles in American Art Collector Magazine, and Cape Cod View, which helped drum up a lot of excitement and crowded openings at the Cape Cod Museum of Art, and at the Addison Art Gallery. Well done Helen and Domonic for putting on such successful openings in February! (They sold a lot of our work in the first two days!).
The best part of the weekend was getting back outside to paint. We had unusually high temperatures this week, and we took full advantage. Jerome Greene and I took Frank Gardner, Colin Page, and Dan Corey painting in the Provincetown Dunes.
Bad idea.
Warm for February doesn't mean warm by any stretch of the imagination. The wind was brutal, and we had to tuck down into a stand of trees to avoid being sandblasted. Even dressed for a winter painting session, my fingers went numb. The laughter, however, was worth it.
Saturday, Colin, Frank, Eric Merrell, Jerome Green and I went back up to Provincetown to paint. This time, shielded from the wind in town. We came out with some pretty good sketches. Paul Schulenberg and Jeff Bonasia came along too, but didn't paint. Two cold for those guys I guess.
Check out the gallery's web site to see the paintings, and the American Art Collector articles, as well as photos and a video made from our trip at Addisonart Gallery 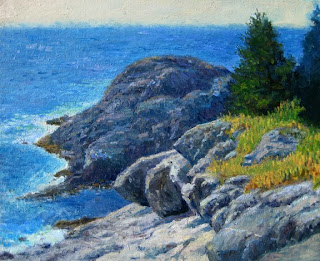